If you’re in the world of entertainment, sports or any public arena — you can also be a prime target for the internet trolls of the world.

Celebrities—males and especially females—are perhaps the biggest targets for online shaming. Generations of stars have endured the sniping and scrutiny of gossip rags, from that of Louella Parsons (America’s first Hollywood gossip columnist) to modern versions like PerezHilton.com and TMZ. But today’s online epidemic of hate has left them directly exposed to their millions of fans—or rather, their anti-fans, whose comments can be fanatically brutal.

Women in Hollywood are routinely criticized for looking too old—or turning to extreme plastic surgery to stay young. They are shamed for being too heavy (think Melissa McCarthy and Rebel Wilson), for being too thin (like Tara Reid and Keira Knightley), or even for having, allegedly, recently eaten a hamburger (like Selena Gomez, Kelly Clarkson, and Anne Hathaway).

CNN’s website has featured a running slideshow tallying celebrities who have been body shamed, which as of this writing stands at twenty-nine and counting. Even across the pond, a British TV show dedicated to the genre, called Celeb Trolls: We’re Coming to Get You, hunts down those who harass celebrities online.

Although some would dismiss this bashing as the price of fame, many stars have revealed that these words do have the power to wound. “I’ve never been more verbally abused in my life than on Twitter, and specifically in the last few months, having come on this show,” observed actress Candace Cameron Bure, after she joined The View during the 2015 reboot of her sitcom Full House. “You don’t have to verbally abuse me and rape me. That’s what they do to me on Twitter.”

When Twitter comments were made about how the late Carrie Fisher’s body had aged between the original and current Star Wars films, she responded fiercely, revealing how she felt. 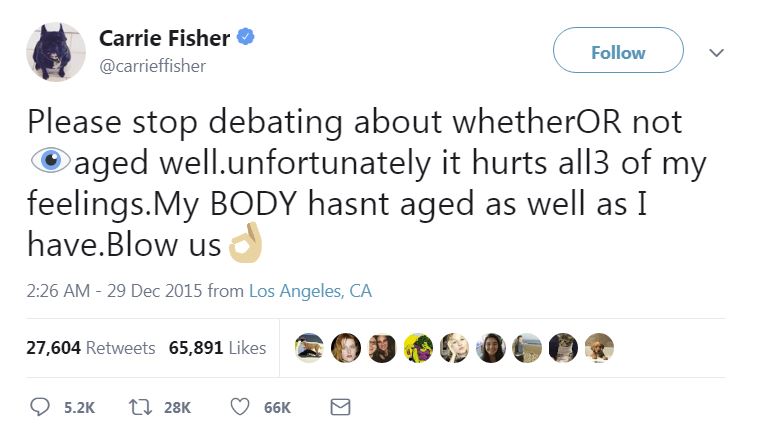 During the 2016 holiday season, talk show host Wendy Williams shared a Christmastime “throwback” photo of herself on Instagram as an “awkward twelve-year-old,” and was likely disheartened to find herself slammed and the subject of mean memes. Some celebrities have taken to protecting themselves by outsourcing their social media accounts to their underlings.

Refusing to be shamed

Another downside of being a female celebrity: you’re more likely to have your naked photos hacked and posted online, as stars from sportscaster Erin Andrews to actress Scarlett Johansson have discovered. In 2014, the infamous news broke that a ring of hackers was trading noods of female celebrities, including Kate Upton, Kirsten Dunst, and Jennifer Lawrence, stolen off of Apple computers using a “sophisticated phishing scheme.”

One Pennsylvania man was eventually caught and pled guilty to “unauthorized access to a protected computer to obtain information.”  The scandal was called “The Fappening,” after its sub-reddit thread name. “For their victims, it is no laughing matter,” Edward Lucas wrote of the scandal in his book Cyberphobia. “Even the most energetic and expensive legal response cannot scrub the stolen photos from the Internet. As fast as you persuade or order one site to take them down, another puts them up. You can never be sure that they will not appear again—someone, somewhere, has them on his computer, and publishing them takes just a couple of mouse clicks.”

In a Vanity Fair interview, a defiant Jennifer Lawrence refused to carry the mantle of shame for taking the nude photos. “I don’t have anything to say I’m sorry for,” she said. “I was in a loving, healthy, great relationship for four years. It was long distance, and either your boyfriend is going to look at porn or he’s going to look at you.” She blamed the hackers, as well as those who looked at the photos, for what she rightly called a sex crime. “I can’t even describe to anybody what it feels like to have my naked body shoot across the world like a news flash against my will,” she said. “It just makes me feel like a piece of meat that’s being passed around for a profit… Anybody who looked at those pictures, you’re perpetuating a sexual offense. You should cower with shame.”

These are excerpts from Shame Nation: The Global Epidemic of Online Hate (Sourcebooks, October 2017) with a foreword by Monica Lewinsky.

Women may be the targets of the majority of cyber-abuse, online harassment and other forms of digital hate, but with the power of ‘togetherness’ and learning that we are not alone, slowly but surely, this cruelty will be part of history.

Dear P.U.R.E.™ and Sue, I just wanted to give you an update. It was unbelievably difficult, but I feel sure that I made the right choice. She is beginning to admit that she has some issues to work on and I can rest assured that she is safe and well cared for. I knew that, if I kept her at home, it was only a matter of time before I would have gotten a call from the police dept., the emergency room or, heaven forbid, the coroner’s office. You may have helped me save my daughter’s life an… END_OF_DOCUMENT_TOKEN_TO_BE_REPLACED